Under the Hood: The Mechanics of the Human Machine 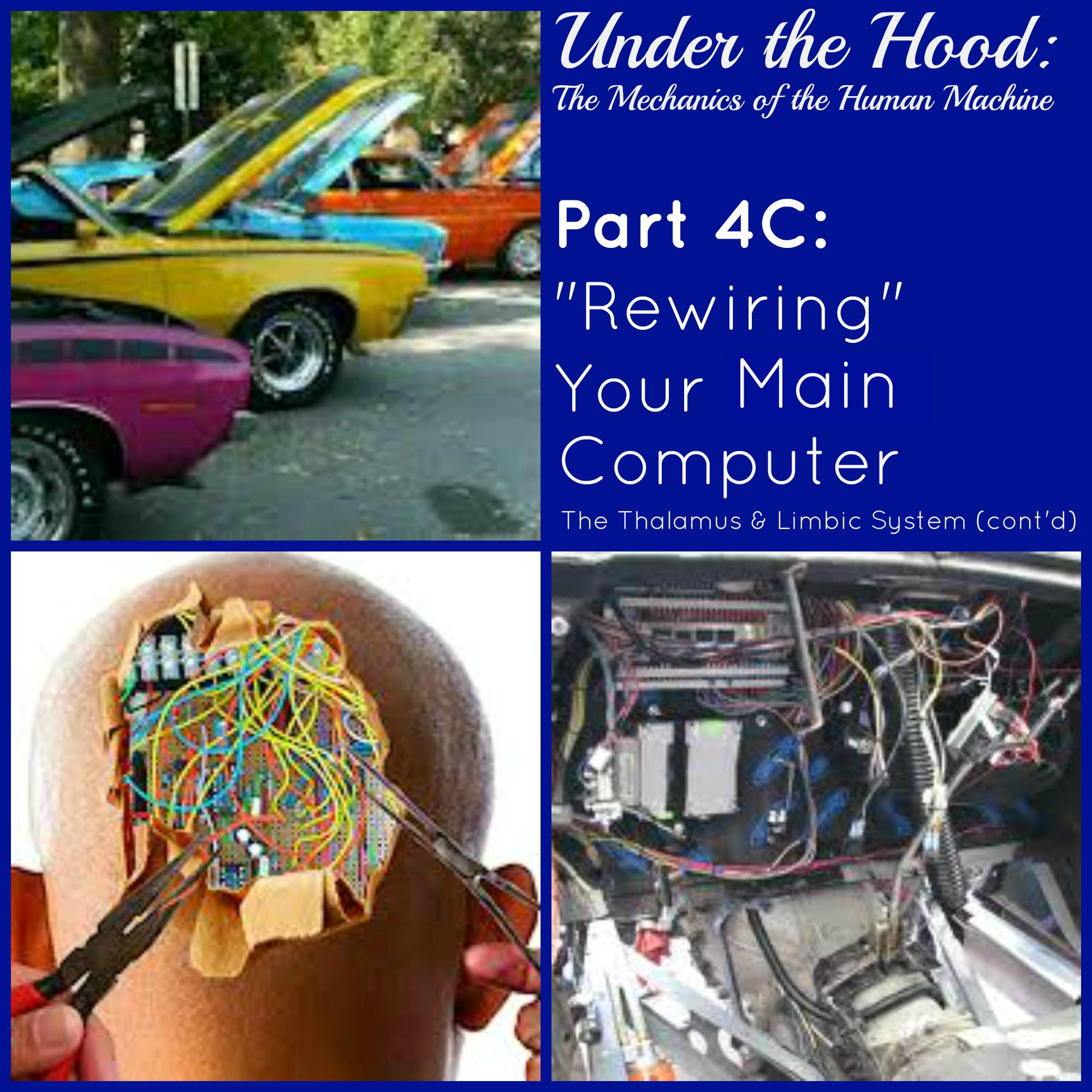 In Parts 4A & 4B of this blog series, we talked about how smell and taste are linked to memories and emotions, and how these two senses can enhance learning, memory and healing, both emotionally and physically. We also learned about the power of our own voices being used to overcome negative thought and behavioral patterns. This is what is referred to in the Bible as “renewing our minds”(1). In this blog, we are going to delve more deeply into how how hearing, sight, and touch can be engaged in the renewing process which is likened to “rewiring your main computer” in your Human Machine.

Emotional trauma before the age of puberty leads to what Dr. Paul Hegstrom of Life Skills International (2) refers to as “arrested development” or “fixation.” A person will be literally “stuck” at the age of emotional maturity when the trauma or woundedness occurred. So, an adult who manifests any of the following behaviors may actually suffer from a state of emotional arrest or fixation:

Dr. Hegstrom explains the brain chemistry of emotional trauma, which includes the premature release of neurotransmitters used for reason before the child is capable of reasoning. You would think that this would lead to an early development of logical thinking, but it actually has the opposite effect: the child is forever stuck in immature thinking and reactive behavior based on emotion. The frontal lobe where reason takes place never develops in a traumatized child who lives in a state of emotional reactivity. I say “forever” and “never,” but that is only if the person does not seek out healing through a new way of thinking. In His mercy, G-d has provided a way for us to rewire our brains so that we can overcome immature thought patterns and behaviors. Dr. Paul Hegstrom works with inmates who are serving time for domestic abuse, and brain scans before and after his Life Skills program show a significant difference in frontal lobe development where reason takes place.

At New Vitality, I use a variety of tools to stimulate the five senses so that emotions can be effectively surfaced, processed and rewired. In Part 4B of "Under the Hood," we talked about the senses of smell and taste being stimulated through the use of essential oils and foods. Our sense of sight can also be used to overcome negative thought patterns and habits. This is particularly true for addictions to pornography. According to Douglas Wiess who wrote Sex, Men & G-d, man is designed by his Creator so that the first time he has an orgasm, whoever or whatever his eyes are fixed upon is permanently imprinted upon his mind; this is what he is connected to in the form of a “photographic attachment.” If a man's first experience is with “the wife of his youth,” then he is “glued” to her through sight and sexual release. This is why pornography and sexual addiction are so destructive to marriage. Pornography acts as a substitute for the real person and creates a great chasm between a husband and a wife. Fortunately, the brain can be intentionally re-programmed for “sexual success” through the sense of sight:

Our senses of touch and hearing can be used to overcome negative habits as well. Related to touch, the first time that we do any action, a neural pathway is laid down in our brains. So, think about playing a sport or musical instrument: the first time you learn a new skill or play a new piece, it is critical that you do it slowly and with intentionality. If you do it without error the first time, then you are well on your way to “perfect” execution of that skill in the future; however, if you make an error, such as a wrong body position or wrong key-stroke, then you must re-train the brain to do it correctly. And we all know how difficult it is to break a habit vs. creating a good habit in the first place! The more we practice any action, whether positive or negative, the stronger that neural pathway becomes which creates “muscle memory” and the formation of habits. From an emotional standpoint, touching someone unexpectedly can trigger certain emotions in those who have been traumatized. Clients who are able to identify or allow that negative emotion to be accessed devoid of adrenaline, can then use the other senses, such as hearing to effectively process that emotion and experience healing. This is how EVOX Perception Reframing software works: electronic voice frequencies are fed back to clients through the software, and clients also use their own voices to express truth and new intentions/ commitments. Speaking the word of G-d combined with Bach Flower Essences or essential oils supercharges this healing process; thoughts and beliefs are powerful, but not nearly as powerful as the SPOKEN word, especially the word of G-d!(3) As mentioned in Part 4B, the thalamus of the brain will only obey our own voice, so SPEAKING intentions, commitments and truth are critical for healing emotions and creating new habits.

Amazingly, SINGING the word of G-d is even more powerful than speaking it! We see evidence of this with King David in the Psalms where he often begins in a low emotional state, and by the end of the Psalm, he is singing praises to G-d with a new hope and spring in his step! The Psalms are full of music, written in specific keys, the same keys as classical music, that bring health and healing to humans even today. The biblical Tabernacle and Temple were not only places of worship, but places of healing that engaged the five senses to restore the worshiper to wholeness and completeness.

Want to learn more about how we were created and how to re-wire the brain?  Download "Training the Inclination" from my seminar series called "Back to Biblical Health for Women" for only $9.99.