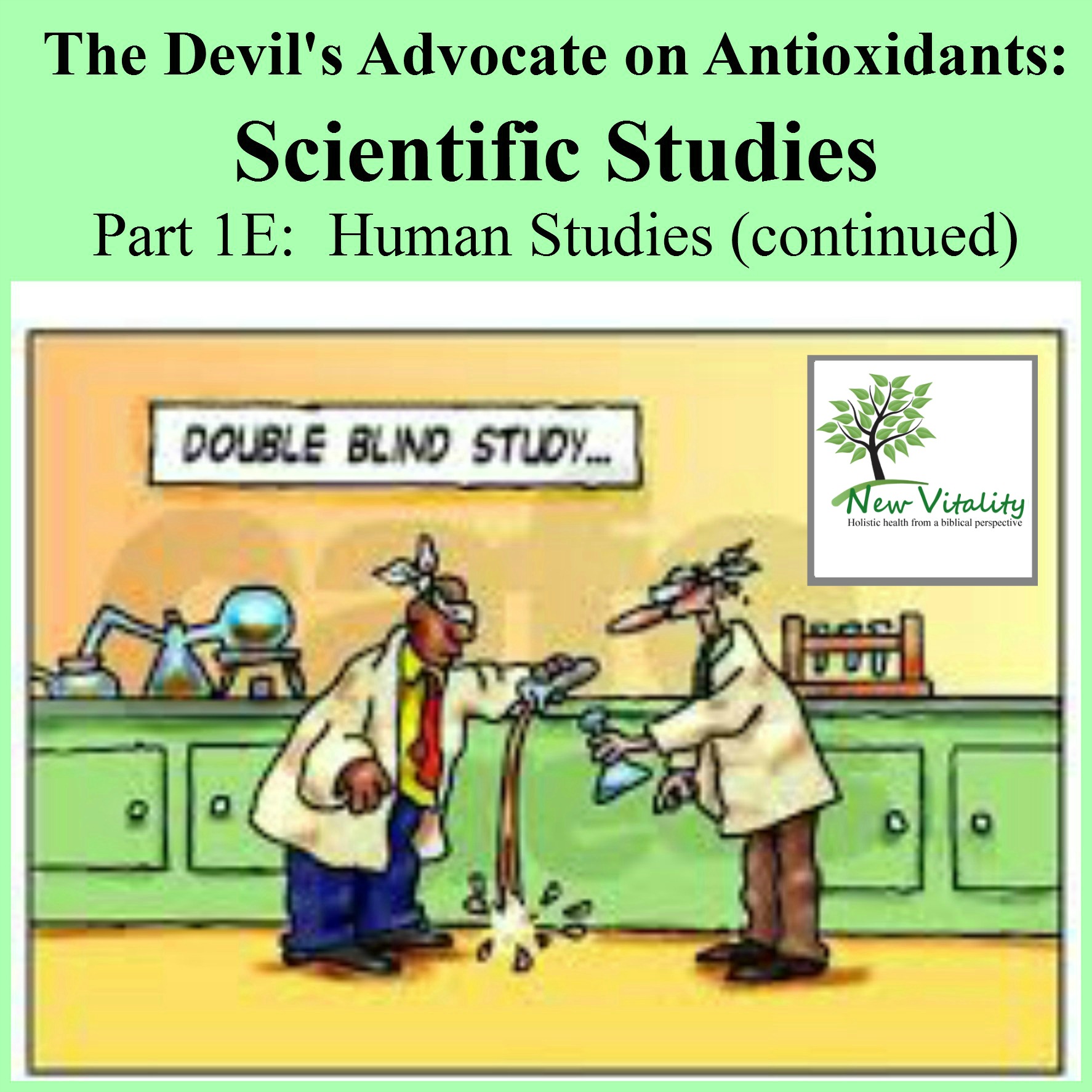 Well, we are nearing the end of the discussion about Scientific Studies. For a prelude to today’s blog, refer to my blogs beginning with The Devil's Advocate: Which Way is Right?. Last time, we discussed the subtypes of Observational Human Studies: Case-Control and Cohort.  Today we will discuss the second main type which is where things get really interesting!

2)  Clinical Trials-- also called Experimental or Treatment Studies in which participants may be grouped by chance (random) or deliberately (controlled) while an intervention is introduced and the effects studied. The Women’s Health Initiative is an example of a nutritional study within this category. There are three main subcategories of Treatment Studies:

Speaking of antioxidants, this is what fueled the initiation of this blog series! There is so much information out there, and much of it says that antioxidants are good for us, but WHO is saying this? And WHAT is their BIAS? If a trial is conducted by a supplement company on their OWN products, your suspicion should be raised! But what about an independent study? Who funded the study? Also which factors were considered and which were not? For instance, in The China Study by Dr. Colin T. Campbell, a large focus is placed on whole-food, plant-based diets for the prevention of heart disease, high cholesterol, hormonal imbalances, and cancer, ultimately pointing to casein as being the culprit for turning on and off cancer initiation and promotion in the body, especially when the body has been exposed to toxins such as Aflatoxin.

But I would pose the question, “What quality of animal products were used in these studies?” If the products were pasteurized or from animals given growth hormones, steroids, and fed on a corn-based diet vs. their natural diet, then of course, you would expect higher incidences of these diseases-- after, “You eat what you eat eats too.” (8) Furthermore, what about cultures around the world that are sustained on animal protein-rich diets yet do NOT suffer from these diseases? Weston A. Price studied non-industrialized, native people groups around the world, some of which subsisted on an animal protein-rich diet, such as the Inuit, and their incidence of these modern “diseases of affluence” were much lower than in Western cultures such as the United States where diets were highly processed.

According to several studies cited in The China Study, early exposure to cow’s milk formula was identified with a significant increase in the risk of developing Type 1 Diabetes. But what kind of cow’s milk formula-- does it also contain High Fructose Corn Syrup? Is the milk pasteurized? Infantile obesity is cited as an epidemic by Dr. Robert Lustig of the UCSF Obesity Clinic (9) Read a critique of The China Study at Dr. Mercola’s website.

So, I encourage you to make these same considerations when you read about antioxidant studies. I am not going to answer the question for you, but I hope that I have equipped you with the knowledge about these studies and factors that can skew data toward a desired outcome based on personal interest. Meanwhile, please download a FREE list of Reputable Studies Conducted on Antioxidants and read about the health benefits of free radicals as well.

UPDATE: I have received feedback that people feel like I left them hanging regarding whether or not antioxidants are beneficial to our health.  Scientific studies are conflicting, some saying that indeed antioxidants are beneficial to human health by reversing and preventing disease.  Other studies show that Antioxidants actually promote disease, specifically cancer (up to 400% increase in melanoma in participants in a 10-year antioxidant study!!).  Through this blog series, I hope that I equipped you to discern the factors that contribute to contradictions in studies: bias, funding, control factors, types of antioxidants utilized (natural vs. synthetic), etc.

To clear things up a a bit, let me repeat what I said in the very first blog of this series:  "I want to be clear that naturally occurring antioxidants in fruits, vegetables, and herbs are NOT bad for our health, but high dosages of antioxidants in the form of supplements, especially SYNTHETIC versions, are the real culprits."

Additionally, let me leave you with these thoughts:  "Antioxidants are nothing more than preservatives.  Artificial vitamins act as antioxidants and actually cause disease!"-- Mark Anderson from Standard Process -AND- "There's something about the way that Mother Nature packages antioxidants that we haven't figured out yet when we go to package them in pill form..."  -- Dr. Elaine from CBS Healthwatch prior to 2007.

Hopefully this makes things a little more clear about where I stand with antioxidants and free radicals!!

6      The Journal of American Society of Nutrition, 2007, “Antioxidant Supplementation Increases the Risk of Skin Cancers in Women but Not in Men.”

Worth Your Weight in Salt
The Devil's Advocate on Antioxidants: Scientific S...