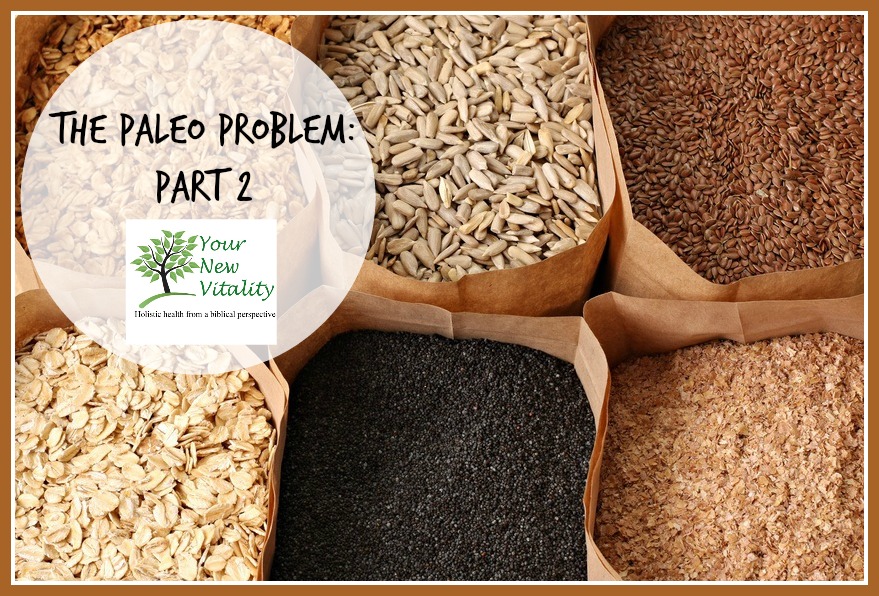 All of the positive points about The Paleo Diet I mentioned in Part 1 of this blog series agree with biblical truth, but there are some distinctions that I would like to make and hope will provide a few tools with which to evaluate not only The Paleo Diet, but any other “diet” out there that comes your way:

Don’t get me wrong here. I am not advocating consumption of large quantities of grains-- overconsumption of grains is part of the reason that we are in such a health crisis today in America! But I do believe that grains and legumes were a part of the original diet from creation, and ancient grains such as Einkorn, Emmer, Barley and Spelt, as well as grains before modern genetic modification, were quite a different species from what we have today. The protein to carbohydrate ratio of wheat has significantly changed over time! And I am convinced that today’s “wheat” in fact is linked to inflammation, high blood sugar, allergies, and a host of other health problems. Breads were more often made from sprouted grains and legumes in biblical times, which have an even lower glycemic index. When sprouted or soured, the seeds do not need to be ground first, and the soaking process also removes the harmful phytates that Dr. Cordain understandably repudiates. Afterall, phytates prevent digestion and block absorption of nutrients, particularly zinc, which is critical for hormone and endocrine balance. Anything sprouted becomes a super food with multiplied nutrient content and abundant naturally-formed probiotics! With today’s nutrient-deficient soils and hence less nutrient-dense foods, sprouting is an excellent way to maximize nutrition.

In addition to modern grains being genetically different from their ancient predecessors as well as being prepared in a different manner, grains compose 24% of the modern American diet as opposed to ancient diets where although bread was a staple, it did not compose such a large proportion of the diet. Today, an inordinate amount of the ingredients in processed foods are derived from corn, soy and wheat. Additionally, it seems that the Standard American Diet (SAD) consists of only 8% fruits and vegetables while refined carbs, added fats, and added sugars make up about 61% of our diets!

The hybridization of wheat over time has also created "recognition problems" in the human body.  Unlike when humans reproduce, every time wheat is hybridized, chromosomes are multiplied resulting in modern wheat containing 42 chromosomes as compared to its ancient ancestor Einkorn which only contains 14 chromosomes. (1) Additionally, the amount of gluten proteins in wheat have increased which are unrecognizeable to the human body.  Dr. William Davis believes these unique protein glutens to be the root of gluten sensitivities and intolerances in modern America.  According to Wheat Belly by this famed cardiologist, "One hybridization experiment yielded 14 new gluten proteins in offspring that were not present in either parent." (2)  These are foreign, unique proteins that may cause the body to react.  If you experience any of the following symptoms, you may have a sensitivity to this grain or even to gluten itself:

If you do suffer from any of the issues listed above, a simple way to figure out if there is a connection to wheat is to simply cut it out of your diet for 1-4 weeks, then reintroduce again after that time period.  Often you will become much more attuned to your body during this break, and there will be a noticeable difference when you try eating wheat again.  The same test can be run if you suspect dairy to be a problem.  In either case, then The Paleo Diet may be one answer for you.

Next time, we will discuss the biblical vs. paleo position on dairy. During the interim download your FREE introductory copy of my eBook called Back to Biblical Health for Women.

What is your experience with grains? Do you find that sprouted grains are less reactive? What do you use instead of wheat?

Update:  A recent study conducted in Italy found that souring grains (sourdough) reduces glutens from 75,000 ppm to under 12  ppm, which technically renders wheat gluten-free (under 20 ppm) according to the new FDA gluten-free labeling laws.

Already Registered? Login Here
No comments made yet. Be the first to submit a comment

By accepting you will be accessing a service provided by a third-party external to https://yournewvitality.com/

Direct Link
Get started on the road to better health!