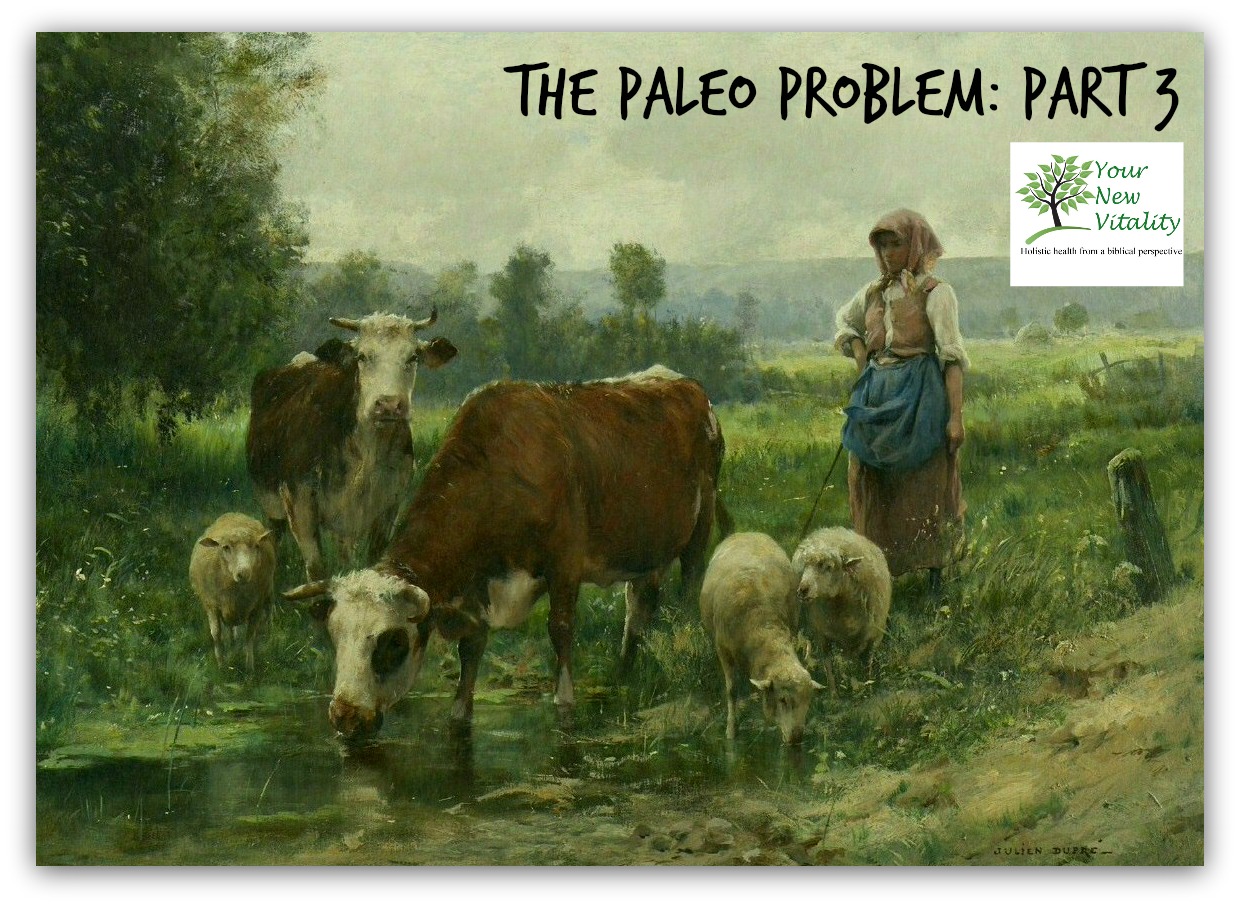 In Part 2 of this blog series, I talked about the distinctions between a biblical diet vs. The Paleo Diet related to grains, and I concluded that grains were indeed included in the diet of early people, although to a much lesser extent and were sprouted or fermented before consumption.  Today we will be examining another category of food that is not included in The Paleo Diet on the premise that it was not consumed by pre-historic people either.

As a point of interest, opponents of drinking milk often make the statement that, “Humans are the only species that drink the milk of another species.” I don’t think so! Read what Dawn Gifford at Small Footprint Family has to say:

“Many mammals drink other mammals’ milk. For instance, pigs are notorious for breaking into the dairy barn just to drink from the cows. Some animals also sometimes nurse orphan animals of other species. Primates love cow’s milk and ask for it from their handlers. Raccoons prefer it when dumpster diving/scrounging around in cities. The Red Billed Oxpecker perches on the udders of Impala and drinks their milk. On Isla de Guadalupe, feral cats, seagulls, and sheathbills regularly steal the milk directly from the teats of elephant seals. Predators in African savannahs fight viciously over the full udders of the nursing animals they’ve hunted down. Most animals would gladly consume milk if you gave it to them; they just lack the access, brain power, and opposable thumb to get it.”

While I concur that modern, pasteurized, processed milk is hard on the human body, as are modern, unsoaked/ unfermented grains, I believe that raw and/ or fermented grass-fed, organic dairy products have significant health benefits, such as the X-Factor or Activator X. Lauren Geertsen of Empowered Sustenance wrote an excellent article called 6 Reasons Raw Milk is Special about this factor and other amazing qualities of raw milk.  And, once again, there is a biblical precedent set for consumption of milk when Abraham served curds and milk to his angelic visitors. The question may be begged, “What kind of milk did ancient people drink?” More often than not, I believe it was primarily from the flock, as in sheep and goats, but Scripture also mentions the milk of other animals as well. A Land Flowing with Milk & Honey was also a blessing to G-d’s people, not a curse. Both milk and honey were a part of the biblical diet.

If you are interested in acquiring raw organic milk for your family, a great resource is the Weston A. Price Foundation (WAPF). If you live in my hometown of Loveland, Colorado, you can buy a share of raw milk for $30, then one gallon per week is $10 at Rocky Plains Quality Meats. Or contact the Fort Collins WAPF for other sources in this area. I know that $10 per gallon may seem very expensive for organic raw milk, but consider it an investment in your health, and remember that disease is much more costly!

What about you? What kind of milk do you drink, if at all?

In my next installment of The Paleo Problem, we will learn about my final two contentions with The Paleo Diet: the exclusion of legumes and sodium. Learn more about ancient biblical health and beauty secrets in my FREE eBook.