Worth Your Weight in Salt

Why You Need Sodium 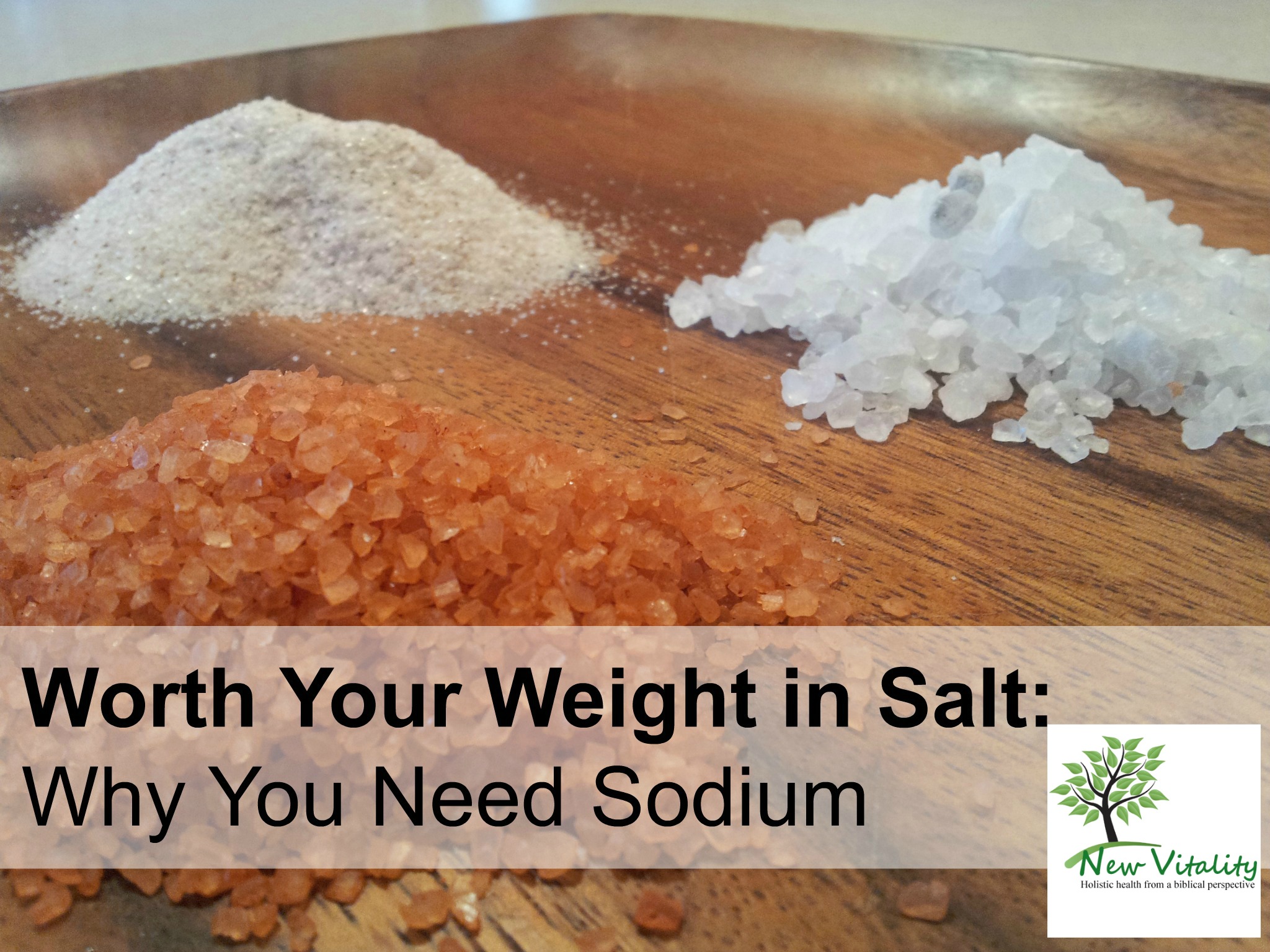 Salt has a bad rap in modern thought. I’m sure you have heard it said that “Salt causes high blood pressure, stroke, heart disease, water retention, etc.” (1) But what are the facts, and what is this compound called “Salt” today? Salt consists of two molecules of minerals joined together to form a new compound: Sodium (Na) + Chloride (Cl)= Sodium Chloride (NaCl). Sodium and Chloride both occur naturally in foods and are essential elements to health.  Dr. Bernard Jensen even classified people according to the mineral dominance in their bodies: High Sodium people include the French, German, Italian, Austrian, Turkish, Arabian, Japanese, American Indians and Russian Cossacks. The Chinese were considered a Chlorine Race. Organic Sodium creates flexible joints and a youthful appearance in people, and organic Chlorine from foods is a cleanser which produces limber, acrobatic bodies-- think Chinese acrobats! (2) Both Sodium and Chlorine contribute to flexible joints and muscles-- if you suffer from stiff joints and muscles, try this Veal Joint Broth-- it works wonders!  For local people, bones can be purchased at Rocky Plains in Loveland, Colorado.  Also, a healthy stomach free of ulcers requires a protective sodium lining, and healthy digestion requires Chloride which can be donated from salt and combined with hydrogen in the body to produce hydrochloric acid, or stomach acid. Sodium Chloride is necessary for the transmission of electrical impulses throughout the human body, including the nervous system. Remember how salt water conducted electricity better than plain water in chemistry lab? During hot weather and periods of high physical activity sodium and other electrolytes are excreted from our bodies through perspiration, so they must be replenished.

If both Sodium and Chlorine are minerals that benefit our bodies, what is all the hype about Salt? The problem is not Salt in its natural, organic form, which has been valued since ancient times as an elixir for health, prized as a currency (Roman/ Latin “salary”) and flavor enhancer, and used in religious ceremonies, especially as a biblical sign of the permanent covenant between G-d and His people Israel. Mark Kurlansky aptly states in his book, A World History of Salt, “Salt is so common, so easy to obtain, and so inexpensive that we have forgotten that from the beginning of civilization until about 100 years ago, salt was one of the most sought-after commodities in human history.”(3) The problem is modern Salt, and more specifically, refined Sodium Chloride. Just like its modern cousins named Table Sugar and White Flour, modern Table Salt is pure, white and deadly! Why, you may ask? The answer is simple: modern Flour, Sugar and Salt are all processed using chemicals, including bleaching agents, to make them appear clean and pure! And during processing these compounds are stripped of their beneficial components. While Celtic Sea Salt contains over 80 minerals and elements, refined Salt contains only two: Sodium and Chloride. Additionally, these modern “white trash foods” are synthetically “enriched” with laboratory forms of vitamins and minerals, such as iodine in Table Salt. Although chemically equivalent, there are health hazards associated with these chemical “equivalents” because the human body cannot assimilate the counterfeits as it would “the real thing.”

The Standard American Diet, SAD for short, is based on reductionist principles that isolate the desired part of a whole, while stripping away the beneficial complement of nutrients and fiber that compose the entire package as it was originally created. Sugar Cane is stripped of its fiber, which serves to slow down the release of glucose into the blood stream versus the refined white stuff which rockets through our bodies causing a host of health problems including inflammation, endocrine imbalances, addiction, weight gain, and blood sugar handling issues from alternately spiking and plummeting glucose levels. White Flour is no better, especially given that modern wheat is higher in carbohydrates and lower in protein than its ancient predecessor Emmer. Dr. William Davis cites in his book Wheat Belly that even modern whole wheat contributes to blood sugar spikes that exceed those of surcrose! (4) Refined Salt is“sterilized” by removing naturally-occurring trace minerals such as magnesium and potassium from Sea Salt or Mined Salt. The reason is that these extra minerals may cause color deviations from the coveted, virtuous whiteness of Table Salt.

The truth is that EXCESS Sodium from Refined Salt, not Natural Salt, increases hypertension, cardiovascular disease, kidney distress, gastric disturbances, edema, adrenal stress, strokes, etc. But any mineral taken in isolation without the necessary opposing minerals will create an imbalance in the body, and too little sodium (hyponatremia) comes with its negative reactions as well:

But what about sports drinks? The original Gatorade was a different animal from today’s adulterated forms. Remember how it used to taste back in the 1970s (I’m showing my age here)?  Dr. Robert Lustig likens it to the flavor of the “end product” of Gatorade that is excreted from the body (LOL!) Kids didn’t want to drink Gatorade when it was first created! Modern sports drinks are laden with HFCS (sugar), sucrose (sugar), glucose (sugar), fructose (more sugar)-- 75 grams of sugars for a 16 ounce bottle!   Now, teenagers drink the stuff like water, along with other sugary foods and drinks, which all contribute to the spike in obesity and early onset of Type 2 Diabetes in America’s youth. Like Salt, Sugar is necessary for a healthy body, but everything must be in moderation!   Whether an athlete, elderly, or the average American during hot summer months, why not try a healthier alternative? Try my recipe for Herbal Sports Drink.

If it’s all about BALANCE, what is the right amount of sodium for optimum health? While some tribal peoples consume as little as 1150 mg of sodium per day, the Japanese by contrast consume an average of 4650 mg per day while maintaining a lower risk of cardiovascular disease than most other developed countries. (11)(12) The average American consumes about 3700mg of sodium a day (mostly from processed foods containing Refined Salt), and the incidence of high blood pressure and heart disease have risen over the last 50 years in spite of sodium consumption in America remaining stable over that same time period. (13) I like the approach of Chris Kresser, a California acupuncturist and practitioner of integrative medicine: “While salt recommendations vary between individuals based on age, gender, physical activity, and health conditions, I feel that the data supports an intake between 3000 and 7000 milligrams of sodium, or 1.5 to 3.5 teaspoons of salt, per day.” (14) Instead of this dead, refined salt, opt for such Celtic Sea Salt or Himalayan Salt, avoiding warm water sea salts which are higher in toxins, or reach for a Mined Salt such as Orsa or Redmond’s Real Salt.

Additionally, did you know that if you are craving salt, you are likely deficient in Potassium and/ or other trace minerals? Again, my Herbal Sports Drink provides a healthy alternative that will help restore the right balance of minerals and electrolytes in your body! Coming soon: complete kits for $42.00 plus  tax (that's only $1.66 per gallon)-- stay tuned!  Meanwhile, try it, and let me know what you think. You can tweak it to your liking and health needs by altering the herbs and spices added!

Tweet
The Apple of My Eye
The Devil's Advocate on Antioxidants: Scientific S...

Already Registered? Login Here
No comments made yet. Be the first to submit a comment

By accepting you will be accessing a service provided by a third-party external to https://yournewvitality.com/

Direct Link
Get started on the road to better health!